The Harvard, The Hughes and the Vanguard, all distinguished members of our collection. The hybrid ‘Broxford’ boasts the sleek formality of an Oxford together with the traditional detailing of a brogue. Then there’s the Monkstraps, Chelseas and Loafers, all carefully hand-crafted, ready and waiting for a long stroll down the King’s Road and beyond.

Most of Eves & Gray fine footwear, as you may have noticed, are named after aircraft – E&G’s founder Tim, took inspiration from his fathers life long involvement with Aviation. Stoo’s first tour in the air force after he finished training was on Victor’s, 214 Squadron. He was on the crew of the Victor in this air to air image, seen on the cover image above refuelling two Lightnings over Orkney – this was taken in the late sixties. 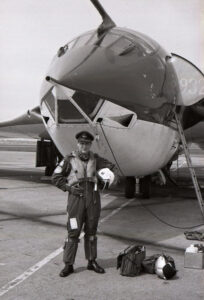 Pictured in front of the Victor, Captain Stewart Waring began his professional flying career in the Royal Air Force, some 18 years later he went on to Civil Aviation to fly freight – live eels, day old chicks, race horses, pop stars and even passengers! Off –duty there was always time for a spot of flying vintage. Stewart was born in Helen’s Bay, Northern Ireland and, having flown all over the world, he has now reluctantly retired after 49 years at the controls. 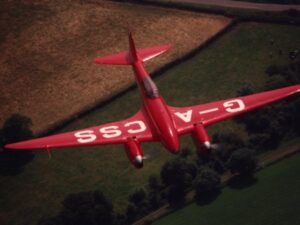 The greatest air race in the world, the MacRobertson saw the custom-made Comet Racer take to the skies in 1934, travelling from England to Australia it won this famous London to Melbourne Race. Stewart was selected to fly and display this Icon of British aviation’s World beating excellence following its restoration (pictured above). The fun didn’t stop there, from the Bristol Boxkite to the world-renowned Spitfire, he’s flown 26 of the aircraft that make up the World famous Shuttleworth Collection. Hangared at Old Warden Aerodrome in Bedfordshire, the Museum is well worth a visit. Pictured below is Stoo Flying the Boxkite at Old Warden (this is the replica that featured in ‘Those Magnificent Men in their flying Machines”. 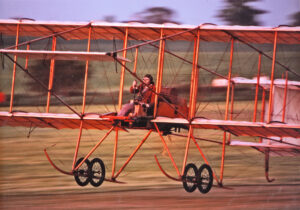 Although no longer flying commercially, today Stewart is always ready to get involved in all-things aviation. It’s that kind of passion that inspired the Eves & Gray collection and that’s why most of our shoes are named after some of our favourite aircraft. An exception of course, The Maxamillion, named after the first of the third generation of Waring boys.

The Eves & Gray eclectic mix of luxury shoes offer the most discerning dapper gent an excuse to add to his collection. A flash of our signature purple will complete your look with a just a hint of the extrovert. From the Luscombe to the Batwing, aircraft have inspired our designs with their anticipation of travel to exotic destinations.

The ‘vintage’ influence is at the heart of our contemporary style, we’ve taken something we know and love – bloody good shoes old boy, and put our own stamp on it, reinventing a timeless piece to wear and enjoy now, and for years to come.

Whether you’re spending a night chasing the green fairy at the Moulin Rouge or manifesting an incognito meeting at Gotham City’s hotspots, flaunt our remastered classics and do them justice – just don’t do anything we wouldn’t!

The finest quality shoes I have ever purchased. Everything about the experience is first class, from the materials to the packaging.

Our luxury King Cobra headed shoehorn was specially commissioned for Eves & Gray. Presented in a snakeskin effect printed box and including a drawstring bag for hanging, the King Cobra makes an unusual, useful and novel gift for the man who thought he had everything.

The Cobra Shoe horn can be added at any point while shopping: As soon as your basket qualifies, the discount will automatically apply.

Cart sub total, before shipping, needs to be £300.00 or more (excluding your free item). Items in cart can include items on sale and/or clearance.

Offer only available until the end of February. Offer is for one free Cobra shoe horn per order.

BE THE FIRST TO KNOW

about our latest collections and exclusive offers.